According to the plans and policies for the development of the automotive industry, a quarter of the commercial vehicles produced in the country are to be exported by 2025. The estimated production of commercial vehicles (passenger and goods transport) is expected to reach 120 thousand units by that year. 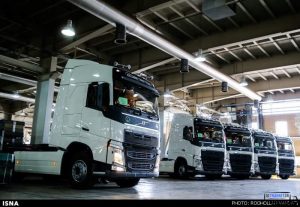 Reports released by the Iran’s Automotive Producer Association shows almost 40% growth in car production respect to a year ago; from March to December 2016, a total of 950 thousand cars, pick-ups, trucks and busses have left the factory floor.

However, based on the statistical reports from Iran Customs Administration, currently exportation of Iranian consumer vehicles is nearly zero. Therefore, to reach new goals, not only domestic car makers must improve the quality of their products, but also demand in the market should rise.

One solution could be the Government’s plans for boosting production in various industrial, mining and infrastructural sectors. Developing these projects requires more transportation, which can increase the demand for domestic and foreign use of heavy vehicles.

Businesses halt due to USD crisis

Iran newspaper writes that the foreign currency crisis has caused many businesses to halt sales. The trend began with household appliance retailers which presented the excuse that due to limitations in supplying foreign currency, they […]

In 2014, total shrimp farming production of Iran reached 22500 tones, says FAO. Shrimping in the Persian Gulf by Iranian trawlers was nearly 8600 tones. In Sistan and Baluchistan province, located on the border with […]