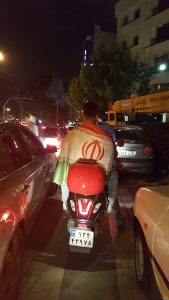 The same President for Iran; A new Mayor for Tehran

Rohani wins the presidential election for the second time, giving hopes that the country would continue its international policies for the next four years. Due to unexpected contribution in the election, long queues were formed at the polls. The Ministry of Interior Affairs says that nearly three million people could not vote as the polls should close at midnight according to the law.

At the same time, the election for City and Village Councils of Iran was held. In Tehran, the reformists won all the 21 seats, signaling that after twelve years the current Mayor, Mohammad-Baqer Qalibaf, should plan the rest of his carrier elsewhere.

Chabahar Port to become a rival for Gwadar Port

The Ministry of Roads and Urbanizations sees the future of the north-south corridor in the hands of Chabahar harbor. The Ministry Advisor, Gholamreza Salaami said: “Negotiations with foreign parties for the development of the harbor must be sped up. If the Chabahar rail route is completed, Iran will gain the ability to transit all of the cargo from Southeast Asia via this port.”

The financing of Chabahar railway is faced with a 2.5 billion USD deficit. “China, Japan and India are interested in investing in Chabahar and in the next step developing its rail network. Inviting Japan to invest in Chabahar alongside India is a good option which shows the definite return of investment”, explained Mr Salaami.

Iranian pasta made with Iranian wheat only

Due to sufficient stores and favorable production of durum wheat (pasta wheat), the Minister of Agriculture has banned the importation of this product.

The country’s pasta production factories require 400,000 tons of wheat annually. Currently, 500,000 tons of durum wheat are stored by the Government Trading Corporation and an additional 600,000 tons are expected to be bought from farmers this year which satisfies the country’s demand. The Ministry of Agriculture has said that the quality of Iranian durum wheat is satisfactory and has priced each kilogram at 9300 IRR ($0.3) for sale to pasta factories.

The Tehran Chamber of Commerce Arbitration Center opened in May 2017 in order to handle disagreements between organizations and corporations. In a meeting of Tehran Chamber of Commerce delegations, Dr. Bahman Eshghi, Secretary General of the Chamber explained: “Based on official figures, there are currently 15 million legal cases awaiting hearing in the Judiciary System out of which 4.5 million are from Tehran. It has been estimated that nearly half of the cases are related to the commercial sector and 1.5 to 2 million of those can be solved via arbitration centers.”

The Director of International Cooperation at Imam Khomeini Airport Town Co., Ahmadreza Bayati, announced technical cooperation between Imam Khomeini International Airport and the International Air Transport Association (IATA) in order to carry out the quick travel project and added: “By carrying out this project, the waiting time for passengers will be reduced from 3 to 1 hours. In phase one of this project, passengers can check in online or via a mobile phone application and get their boarding passes immediately after arriving at the airport via automatic kiosks.”

May Iran lose Iraq’s Market?   Although recently Iran is exporting dairy products to Russia, the overall export between March 2015 to 2016, has decrease by almost 5%, reaching $530 million. Vice Minister of Agriculture […]