In his speech in Iran Chamber of Commerce, Gabriel brought a totally new idea for collaboration with Iran. His country is one of the best practices, is not the absolute best, for human empowerment without necessarily academic studies.

In Iran, however, common belief is that promising career could be achieved only through high level of education at the university. Germany has proved a counter example.

Now Vice Chancellor is ready to share their experiences with Iran. 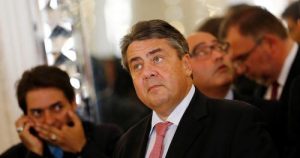 Although German companies are in negotiations with Iran at various levels, compared to French and Italian activities in Iran, it seems that Germans are more conservative in starting new businesses in Iran.

Iran has committed huge investment in buying new aircrafts which is an indication of the potentials in the related infrastructural such as airports. The Italian company, SEA, operating Milan-Malpensa Airport, has made a deal to build a unique terminal at the most crowded Iranian airport, Mehrabad Airport, located in Tehran. The second largest airport in Iran, Mashad Airport, will be renovated by the French. This is while no German company has shown interest to take part in other projects. Is this because Germans are particularly conservative or is it mainly because of the US sanctions?

Currently local experts are working on studying phases of the project.

2025 Outlook for Automotive Industry: Export of 25% of Heavy Cars

Sepah Bank Opens $1b Line of Credit For Bidboland Project

Mohammad Kazem Chaghazradi, CEO of Sepah Bank, announced the opening of a $1b credit line for the country’s largest syndicated banking project. The project is the construction of a second Bidboland refinery in Behbahan, Khuzestan […]