Growth Rate in the 1st Quarter

Although the goal for the current year growth was set at 8%, according to many experts even half of that figure is a positive signal to keep hopes high.

Despite the high speed of business negotiations between Iranians and foreign investors, slowness in building proper banking channels results in the overall progress to become less effective as it was expected.

In order to reach a growth rate of 8% for the next five years, Iran needs to attract $175billion investment annually, at least $50billion should come through foreign investments.

Read More on An Overview On Iranian Economy

During Tehran Chamber of Commerce Meeting this week, its president Mr. Khonsari, warned about the increase in money supply. At the end of spring, i.e. the first quarter of the Iranian year, money supply indicator shows 4.2% growth r with respect to the beginning of March 2016.

The Governmental debt to private sector has augmented by 160.000 billion IRR, i.e. $5billion (at official exchange rate). Volume of long-term deposits at banks have been reduced, due to decrease in interest rates from 22% to 15%.

More money in circulation will immediately lead to higher inflation rate, which took lots of effort from the Government to be pushed below 10%.

Read about Quick History on Inflation Rate in Iran

New Governmental Bonds on The Way 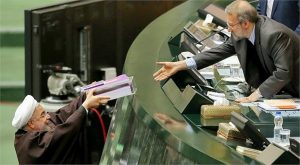 Modifications to the Budget Bill of the current fiscal year have been approved by the Majlis.

The Government is allowed to receive a $5 billion loan from Russia in order to develop its infrastructure projects.

Banks Must Do Banking Financing remains one of the biggest obstacles for Iranian businesses, particularly for SMEs. Low efficiency in financing system causes the cost of credit provided from banks to be much higher […]