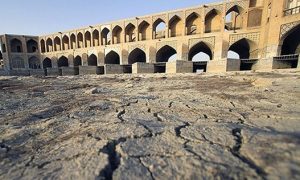 While there is just two months left to the end of the fifth five-year development plan, the lack of efficient management of water resources has become one of the most serious problems in the country. This year, Iran has been faced with droughts for the tenth consecutive year. The Government has therefore been searching for a severe solution to the growing problem of illegal use of groundwater.

“Iran’s renewable water sources have shrunk from 130 billion m3 to 116 billion m3, where 86% of it, i.e.100 billion m3, is in use. This figure is considerably high respect to global averages”, said the CEO of Iran’s Water Resource Management Co.

The Ministry of Energy has announced that the cities of Kerman, Zahedan, Bandar Abbas, Mashhad, Yazd, Esfahan and Boushehr are faced with a water crisis in the coming year. The Government has set a two week deadline in order to devise a short-term plan to solve the water problem in these provinces.

Plasco, Iran’s first high-rise, falls down Since the Plasco Fire Tragedy, which caused the first skyscraper of Iran to completely collapse, the Government is designing different plans to protect its business owners and employees. Almost […]

Iran Economy in Brief Turns One Year Old – No.49