Ministry of Agriculture of Iran is happy that once again, the country has reached self-sufficiency in wheat production. This result was achieved once in 2006. 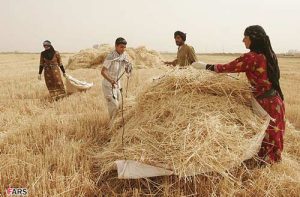 Thanks to more rain fall this year and some improvements in agricultural management, more than 11 million tonnes of wheat is expected to be harvested in the current season. The government will buy the grain from the farmers, paying 130000 billion IRR, equivalent to $4.2 billion at the official exchange rate.

Although reaching self-sufficiency in production of such a strategical product is very important, some economic experts argue that for two reasons it might not be worth the price the Government is paying.

Secondly, Iran is suffering from draught. This threatens the sustainability of self-sufficiency. Some arguments say that instead of having a policy for subsidizing the production of wheat locally, the Government should follow a long-term policy such that the downstream industries can play a significant role.

At the moment, however, the Ministry of Agriculture plans to export 2 million tonnes of wheat to the neighbouring countries.

SAIPA and CITROËN After Iran Khodro, now it was SAIPA’s turn to sign a final agreement with a French carmaker; this time Citroën won the deal. The joint venture consists of establishing a 50-50 joint […]

Unexpected fire for the Minister of Industry and Trade of Iran

On Tuesday, in a sudden letter, President Rohani removed the Minister of Industry and Trade of Iran, Mr Reza Rahmani. Mr Rahmani is the first Minister to be fired since the beginning of the presidency […]