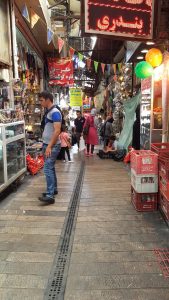 Inflation rate in Iran has dropped to 9.5%, announces the Center of Statistics of Iran on Tuesday. Right at the end of the presidency of Mr. Ahmadinejad in September 2013, inflation rate was 35%.

If the inflation remains below 10% for the current year, it will be a great achievement for the Government as it has only happened twice in the history of the Islamic Republic of Iran that inflation rate was below that figure.

In the Iranian fiscal year 1364, i.e. March 1985-1986, in spite of Iran-Iraq war, inflation rate decreased 3.5 percentage-point and reached 6.9%, that was during the presidency of Mr. Khamenei, the current Leader of Iran.

Although by the end of his presidency, which was coincided with the end of the war and the death of Mr. Khomeini, the inflation had reached nearly 30%.

Afterward, during the presidency of Mr. Rafsanjani, inflation started to decrease again and two years later reached 9%; a record which was never repeated again.

For Mr. Rafsanjani “The Economy” was the first priority and he called the postwar years as “Building Era”. Due to increase of money supply for various projects, the inflation rate went up and reached its highest value since the Islamic Revolution: in 1376, i.e. March 1995-1996, prices went up by almost 50%. Though during Mr. Khatami’s presidency inflation rate was controlled again.

An Overview To The Iranian Economy

Iran’s goal is 8% growth rate for the next five years. For this $175billion annual investment is needed, at least $50billion should come through foreign investments. To encourage foreign investors, Iran has to show stability […]

Three weeks ago the government implemented new policies in order to control the currency market. In simple terms, exporters can now sell their foreign currency to importers seeking to buy currency via the secondary market. […]