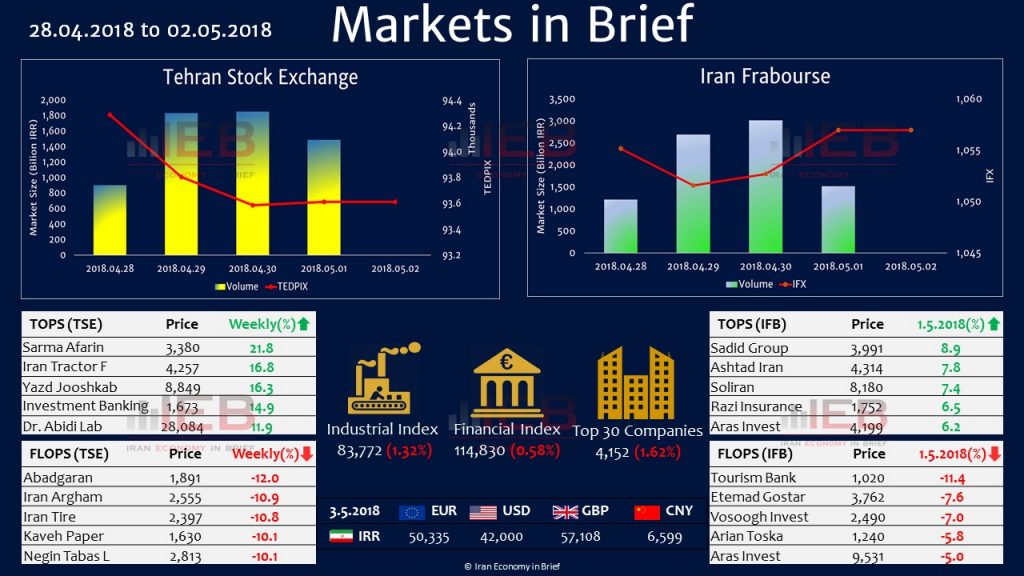 The Mobile Telecommunication Company of Iran, Hamrah-e-Avval, has held a general assembly and announced the profit for each share at 3180 IRR which will be paid by 10th June. Hamid Farhang, the CEO of the Mobile Telecommunication Company of Iran announced a 10 million increase in Hamrah-e-Avval users last year, 5% of which use permanent SIM cards and the rest use pre-paid plans. With 52 million active SIM cards, Hamrah-e-Avval controls 60% of mobile communication market in Iran. In 1396, their total revenue from consolidated investments was 125 trillion IRR with a profit of 30 trillion IRR. 28% of their revenue is from selling internet data.

Tehran Stock Exchange (TSE) passed another falling week. The week was shorter as Wednesday was a religious holiday. First of May is not a holiday in Iran. TSE’s main index, TEPIX, lost 1184 points (1.24%) respect to a week ago. The falling trend seems to continue until May 12 when Donald Trump is supposed to make it clear whether the US will leave the nuclear deal or not. For tops and flops see the charts above.

Ebtekar newspaper published a list of banks and financial institutions whose symbol has been stopped from trading for several months. The symbol of Iran’s Saderat Bank has been blocked since June 2016 due to general […]