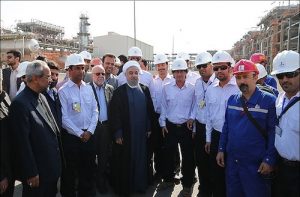 President Rohani will officially inaugurate three more oil fields on south-west of Iran next to the Iraq border on Sunday. The production capacity of south-west fields now has reached 300 thousand barrels a day. The final goal of developing these fields is to reach 1.2 million barrel a day.

Dr. Rohani’s Government invested $7billion on three fields, Northern Yaran, Yad-Avaran and Northern Azadegan. Now the fields of Azadegan and Asaluieh are comparable to the largest oil and gas fields in Iran.

Ministry of Agriculture of Iran calls for an increase in olive oil production to 18000 tones. According to the ministry’s statistics, olive oil consumption per capita in Iran is currently 130 grams per year. This figure is supposed to reach 170 grams in a mid-term program and eventually to 200 grams in a long-term program.

Ministry of Agriculture says that current annual production of olive oil is about 10000 tones a year which in parallel to the changing consumption patterns, should also be increased.

Iranians mainly use corn and sunflower oil for cooking, though recently sesame oil has become very popular too.

Central Bank of Iran is responsible for the deposits and is said to have a proper plan to do so. Mr. Dowlat-Abadi has asked the depositors not to flock in front of the Tehran Justice Department Office.

Central Bank of Iran is increasing its control to identify the financial institutions who illegally pay higher interest rates to their clients.

Walnuts make you clever Iran is the third largest producer of walnut in the world. However, this position alone would not guarantee success in world markets. Iran’s Ministry of Agriculture has announced a ten-year plan […]

Inflation rate in Iran has dropped to 9.5%, announces the Center of Statistics of Iran on Tuesday. Right at the end of the presidency of Mr. Ahmadinejad in September 2013, inflation rate was 35%. If […]