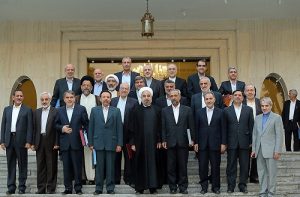 Three ministers of Dr. Rohani’s cabinet have resigned this week, that is to say, their resignation requests have been accepted by the president Rohani.

Minister of Cultural and Islamic Guidance, Minister of Education and Minister of Youth Affairs and Sports should now be replaced.

Rumours of resignation of Mr. Nematzadeh, Minister of Industry and Trade, and Dr. Tayyebnia, Minister of Economic Affairs and Finance, have been denied by the Government. Will this reshuffling support Dr. Rohani for the next presidential election in June 2017, we have to wait and see.

Enough Gasoline for Everybody

“From the next March, Iran will not need to import petrol (Benzin) anymore”, said Mr. Zanganeh, Oil Minister of Iran, this week announcing that soon the Persian Gulf Star Refinery will come on stream.

Iran’s focus is changing from just selling its oil and gas towards developing its petrochemical industry in order to sell products with more added value.

Esfahan Steel Company and The Islamic Republic of Iran Railway Company have signed an agreement whereby the former will produce rail tracks for the latter, believing this new product could revolutionise its profit margin.

Esfahan Steel Company says it has the capacity to produce 400,000 tons of rail tracks per annum, although the annual need of the country has been around 100,000 tones so far.

By anticipating the sales of 150,000 tons of rail tracks in the current Iranian fiscal year (March2016-2017), the company has predicted 5% increase on its profit margin.

Three Foreign Banks in Iran Vice Governor of the Central Bank of Iran, Payman Ghorbani, has announced that three foreign banks have started the process of opening branches in Iran. These are Muscat SAOG Bank […]

Securities and Exchange Organization of Iran obligates banks and credit institutions to apply international standard frameworks (IFRS) to their accounting reports. Mandatory standardization (IFRS) in the reports of large companies in the bourse is a […]

In recent years, economic relations between Iran and Georgia have been improving. Georgian government removed the entrance visa for this country in 2015 which lead to a rapid growth in the tourism industry in this […]