The entire managing board of Securities and Exchange Organisation of Iran has been replaced after the former president, Dr. Fetanat, resigned last week. Health problems is said to be the reason for his resignation.
Dr. Shapour Mohammadi was nominated as the new president of SEO. He was the first CEO of the Energy Exchange of Iran.
The second resignation happened in Iran Chamber of Commerce, the largest private community in the Iranian economy. Mr. Jalalpour who was the president of Iran Chamber of Commerce for 14 months resigned this week due to the heart problem. The new president is to be selected. 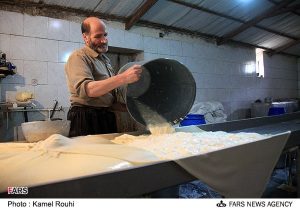 Although Iran has a long tradition in animal husbandry, cheese making and processing dairy products is not very developed.
Tabriz, a city in the north, is well-known for the Iranian traditional cheese and for many the best quality comes from a nearby small village, Liqvan.
Lack of modern machinery for producing cheese causes the efficiency to be lower than the industrialised countries.
The second problem is that each producer can decide on the level of fat in his product within a 15% tolerance set by the controlling organisation which demands that Tabriz Cheese must contain at least 15% fat. This lack of uniformity makes exporting of the products of the same brand more difficult.

The CEO of Iran Water Resources Management Company, Mr Haj-Rasouliha, says that the semi-finished projects in dike building and pipe networking is valued at $58.3 billion.
These projects which were kicked off 15 years ago, according to Mr Haj-Rasouliha, were not chosen based on the need but on personal interests.
With the current annual budget of $1.62 billion that the Government assigns to these projects, it will take 35 years to complete them.

Young People in Iran: Most Encouraging Reason for German Enterprises

In a meeting between the Representative of Federal Executive Board, Mr. Alexander A. Gorjinia, and the president of Tehran Chamber of Commerce, possibilities of extending the collaboration between these two organisations were discussed.   […]