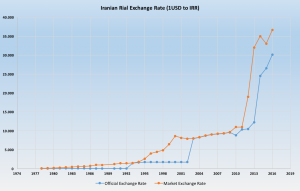 If Iran is determined to get foreign investors in the country, it is essential to offer them a single currency exchange rate.

It is more than five years that the economy is experiencing multiple exchange rates again. With all the effort the Central Bank has put in work, today the gap is 14%.

This difference puts the biggest question in front of foreign investors: which exchange price am I eligible to apply?

The question becomes even more confusing when you may want to deal with a state-owned company or a private one, if the products are considered “strategical” or not.

On the other hand, Iran tries to be recognized as a safe country for investment, but multiple exchange rates are synonyms of an unstable economies.

At this point the gap between the market and official price reached a maximum of 160%.

Currently 1 USD is equivalent to 30885 IRR and 35104 IRR, officially and at the market rate, respectively.

After the Islamic Revolution in 1979, Iranian economy has frequently faced up and down. Obviously the simplest way to cope with it has been applying multiple-tier exchange rates.

Over the past years, if not decades, we have got used not to take seriously the government’s economic forecasts. However, it seems that we should get used to take even international institutions’ forecasts not seriously […]

The Ministry of Industry, Mining and Trade negotiates with American General Electric and Whirlpool as well as Italian Ariston in order to revive domestic home appliance factories. “In order to renew Iranian home appliance manufacturers […]