On Sunday, The Parliament approved all the President Hassan Rouhani’s nominees for ministerial positions, only one was rejected, i.e. the candidate to Energy Ministry.

Although, many expected President Rouhani to appoint at least one female minister, but such did not happen. The President, however, has three female advisors: Massoumeh Ebtekar, vice-president in charge of women’s affairs; Laya Joneydi, vice-president for legal affairs, and Shahindokht Mowlaverdi, special advisor for citizens’ rights.

The Central Bank of Iran announced that only 24 days after the execution of the marriage loan urgency plan, 200 thousand loans have been issued by evelen banks. Based on figures from the Central Bank, so far 620 thousand people have applied for marriage loans. The huge demand has forced the Government to execute an urgent plan.

The Director of Credits at the Central Bank, Ali Ashghar Mir-Mohammad-Sadeghi, released the latest numbers regarding the urgency plan and said: “Before this plan, each month we issued a maximum of 80 loans. In this plan, priority has been given to less developed areas and 25% of the 200 thousand issued loans are for these areas”.

The Central Bank hopes to review and answer the remainder of the requests within five weeks. Eligible newlyweds can apply for a 100 million IRR ($3030) loan.

Expansion of greenhouses in agriculture

The largest glass greenhouse in Iran will become operational in fall 2017 in Aras Free Zone, north-west of the country. This greenhouse is located on a 50 hectare plot, 31 hectares of which is roofed. Due to water limitations in Iran, hydroponic technology has been used to farm produce. The CEO of the Aras Tarla Amin Greenhouse Complex, Hossein Hazrati, said: “In the first phase of operation, 11 hectares of land was used to grow 4.5 thousand tons of tomatoes, 85% of which was exported to Russia, Qatar and Dubai. We expect the yield to increase to 14000 tons of produce once the total capacity becomes operational”.

Financing of this project was valued at 1600 billion IRR ($48.5m) and was equally carried out by Keshavarzi Bank and the private investor. 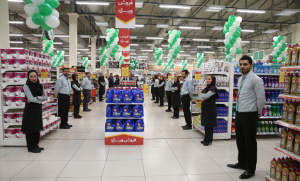 The CEO of Refah Chain Stores has announced that in the first 9 months of their current financial year, sales have surpassed those of the previous year. “After two years, based on the designed strategic plan and the special campaign for Ramadan, we have introduced the ‘New Generation of Refah’ to people. We therefore hope that by the end of the current financial year i.e. 22nd October, we can achieve 80% growth in sales respect to a year ago”, said Farshid Golzadeh Kermani, CEO of Refah.

Refah chain stores were established in 1995 and have become one of the largest retailers in Iran.

70% rise in prices of potatoes and tomatoes

October 4, 2018 Agriculture, Industries, National News Review Comments Off on 70% rise in prices of potatoes and tomatoes

Exchange rate fluctuations have affected prices of almost everything in Iran. However, the price rise in some goods has been more controversial. This includes rise in prices of potatoes and tomatoes. Taadol newspaper reports that […]

In a letter to the Vice President of Iran, Eshaq Jahangiri, the Minister of Agriculture, Mahmoud Hojjati, requested that executive organizations procure their tea from domestic manufacturers. In his letter, Hojjati emphasized that purchasing tea […]

Five hundred young couples, hand in hand, sit next to each other in the amphitheater of Tehran University. Girls are wearing white Chadors (a symbolic sign for a bride), colorful loose scarves and make up. […]

Mining Industry in Iran needs to be revived

by Dr. Mahya Karbalaii in Companies Comments Off on Mining Industry in Iran needs to be revived

Although Iran ranks among one of the most resourceful countries by the number of its mines, however mining industry in Iran makes only 0.53 percent of the total GDP. According to Iran’s Mining House, 98 [...]

Signup for our newsletter

All Rights Reserved to Iran Economy in Brief